The month of Dhul-Hijjah is one of the four sacred months in Islam. The other three being Rajab, Ramadhan, and Dhul Qada.

One thing that is quite common is that we often pay more emphasis on the month of Ramadhan as a month of increased ibaadah, but not so much as the first ten days of the blessed month of Dhul-Hijjah. As we begin to intensify our efforts towards improving our ibaadah this month, I think that it will be a good idea to involve our kids in the acts of worship of the month, so that it can be a form of learning for them and a way for them to also build their ibaadah in the sight of Allah (ta’ala)

What is the Significance of Dhul Hijjah?

In a hadith narration by Ibn Abbas (RA), the Messenger of Allah (ﷺ) said, “There are no days during which the righteous action is so pleasing to Allah than these days (i.e., the first ten days of Dhul-Hijjah).” He was asked: “O Messenger of Allah, not even Jihad in the Cause of Allah?” He (ﷺ) replied, “Not even Jihad in the Cause of Allah, except in case one goes forth with his life and his property and does not return with either of it.” [Al- Bukhari].

This hadith alone tells us the significance of the month. But here are even a few more details:

This is a month that we should be planning to strive the way that we do in Ramadhan. And we should endeavour to include our children in this striving as early as possible so that they can learn about one of the important mawaasim of khayr (seasons of goodness) that we have in Islam. Also, so that they can build their own acts of worship and earn the rewards, in sha’a Allah.

Few Ideas to Engage Children In The Month of Dhul Hijjah

Whether you have a toddler child, teenager or young adult, there are different ways to include them in the acts of worship for these first ten days of Dhul Hijjah, and I share a few below.

Teach Them About The Month

To understand the significance of the month, our first step should be to teach the kids about it. This will give them the ‘why’ of all that we will be doing for the next few days until the days of Eid. Many kids are only familiar with Eid because it is the day of celebration and killing the ram, but they do not know the importance of the days that come before it.

You can educate them from your own knowledge of the month of Dhul-Hijjah, or use the points that I shared above about the significance of Dhul Hijjah. You can find more hadiths relating to Dhul Hijjah by clicking here.

General topics to explore include:

To add to this, I highly recommend using resources like activity sheets and storybooks for children to make this topic even more enjoyable for younger kids. Jeddah Mom has a big list of storybooks about Hajj. Click here to check it out. If you want a wide range of resources that you can download and print at home on the topic of Dhul Hijjah, Hajj, Eid al-Adha, you can find enough at Islamic Comics. Their resources are suitable for toddlers and above.

Invite Them to do Acts of Worship

The first ten days of Dhul Hijjah are days of increased acts of worship. Try to get the kids to join you in the acts of worship that you are planning to do. Older children can fast on the day of Arafah, or all of the first nine days if they are able to. You can encourage them to give charity, even if it is with their deeds and not money. Encourage them to recite the Takbir of Allah (ta’ala) on the day of Arafah.

The Prophet (ﷺ) said: “The best invocation is that of the Day of Arafat, and the best that anyone can say is what I and the Prophets before me have said: Lā ‘ilāha ‘illallāhu wahdahu lā shareeka lahu, lahul-mulku wa lahul-hamdu wa Huwa ‘alā kulli shay’in Qadeer (None has the right to be worshipped but Allah Alone, Who has no partner. His is the dominion and His is the praise, and He is Able to do all things.) [Hisn al-Muslim]

Encourage the kids to make a lot of istighfar and read or listen to the Qur’an as much as possible. Yes, younger, prepubescent children are not accountable for their actions but we teach them the idea of istighfar to inculcate the habit of turning to Allah (ta’ala) in repentance.

Remind them to be mindful of their actions during these important days, and to make a lot of dua to Allah (ta’ala)

We have been granted another opportunity to earn more than our efforts, just like the month of Ramadhan. Let us prepare ourselves and our families for these first ten days of Dhul Hijjah. 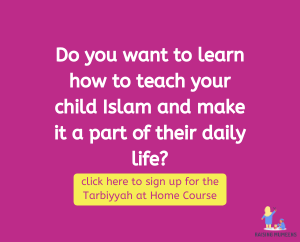